As a result of life altering community, in Dave’s dashboard for life, he takes time to consider what he is giving back. “It's easy to get disconnected from reality. We pretend in our culture to be independent, self-sufficient humans, but really, are we? We are all a tragedy away from needing the support of the community.” says Dave.

Dave believes service to community cannot be understated. “It doesn’t have to be all the cliché things that come to mind like single moms, veterans, homeless and hospitals. Those are truly important, but serving your community is immediately in front of you. Genuine hellos, unqualified apologies, authentic thank you’s, and doing the next right thing even if it is not in your favor. These genuine acts of civility help build community,” says Dave.

Phoenix Children's Hospital
Dave and Matt Allen collaborated with the Bumper to Bumper Radio network to raise money year after year for Phoenix Children’s Hospital. They also got involved at the KTAR Give A Thon answering phones. “Answering the phones is a serious blessing as people’s stories came through with their donations as to how PCH touched and saved their life” says Dave.

National Multiple Sclerosis Society
As Dave lives with MS, the National Multiple Sclerosis Society is very near and dear to him. The hardest part of being diagnosed with MS is the acceptance. Dave says “it’s confusing as the week before you were riding a bike and the next week you can’t visibly see, although from the outside seemingly you look ok.” Dave met and was mentored by people in the MS society that helped him adapt to life with the new disease. Since Dave loves bikes, he fundraises at the annual Bike MS event along with the Walk MS event

Better Business Bureau (BBB)
Dave has served for over a decade as a member on the Automotive Review Advisory Committee (ARAC) at the Better Business Bureau (BBB) and has served as acting chair of the committee in years past. “People confuse legal with ethical and frankly, they are not the same. Fair business practices are what make our economy thrive. The BBB is an influencer in our community for just that, fair business practice. We all benefit,” says Dave

Accountability and Self Betterment Retreats 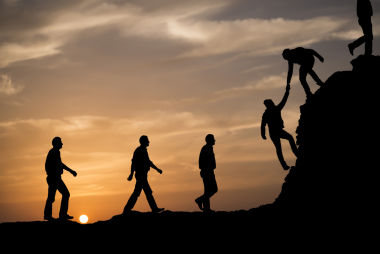 Dave would describe himself as an “Agent of Cultural Change”, and believes we all are. He knows we live in a free country but sees a corrupt system and people living unsatisfied lives in a fog but just don’t know it. Dave believes our culture is so tied to “image management” that people simply live as apparitions of their authentic selves and never really experience the beauty of life. Dave facilitates taking small groups of men, usually to a cabin somewhere, out of everyday life so they can pause and consider just who they are and if they are living a life congruent with their own values. “Although people seemingly have a lot of activity in their life, isolation and loneliness secretly rule the day. These retreats serve as a way to create authentic connections which help people get unstuck,” says Dave. The retreats are structured and facilitated but have no leader as Dave believes there is no such thing as any one guru. The designed point is to help people become their own guru as they have their own stories they need to write and live out. “We all stand to know ourselves through unfiltered connections, sharing struggle, indifference and joy,” says Dave. The retreats are fully anonymous and not tied a specific faith.